Mary Louise Butters Brownies were featured on Food Network awhile back by the HOT! Deen brothers on Road Tasted. They have seen been on the Today Show and are one of Rachel Ray's favorite snacks. But then again, she'll eat anything! Was that mean?

Anyway, these brownies are good and rich! I got a couple sampler packs, ate some and gave quite a few away in gift baskets. She now has 17 flavors! including plain chocolate brownies to those with crystalized ginger, chipotle in adobo, stout beer, roses (yes, roses) nuts, dried fruit and kona coffee. There are so many different combinations but her newest one is the Obama Brownie. 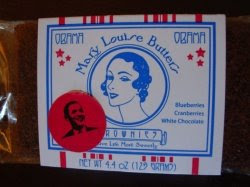 The Obama Brownie is "graced with cranberries, white chocolate and blueberries...It symbolizes the true colors and collaborative efforts as a nation." Proceeds from the sales of the Obama brownie will benefit domestic hunger relief organization Feeding America (formerly known as America's Second Harvest). It's a win win situation!

Right now when you enter Promotion Code: HOPE at the checkout, you can receive 10% off your purchase of the Obama Brownie.

If the crispy edges of the brownie are your favorites part, then try a bag of their biscotti-like Brownie Butts!
Recipe Made by Monica H at 7:16 PM