Mr. H is not a cook, but every once in a while he gets in the kitchen and makes me breakfast. He makes great cinnamon toast and scrambled eggs. I can't watch him make eggs, because his cooking method is completely opposite from mine (he cooks them on super high heat and I always think he's going to burn them or they're going to be rubbery), but I am impressed everytime by how good they are. Anyway, I never had cinnamon toast (besides cinnamon toast crunch) before I met him and now we have it about once a week. It's so good and easy. This would be good on Christmas morning because it feeds as little or as many as you need it to. I hope you make this, because it's the best!

Preheat oven to 350 degrees. Place slices of bread on cookie sheet and spread with softened butter. Use as much or as little as you want but make sure to cover the entire slice evenly. Sprinkle about a tablespoon of cinnamon sugar over each slice evenly. Bake for 14-15 minutes until bread is lightly toasted. Enjoy warm with a cup of coffee or a side of salty bacon!

NOTE: We sometimes use salted butter, because I like the saltiness with the sweet, but use whatever you have on hand. I've tried margarine and it works fine, but you don't get the crunchiness of the sugar like you do with butter.

I've made this in the toaster oven and it works well too, but check them at about 12 minutes, because they tend to cook faster than a conventional oven.

For the cinnamon sugar, add as much cinnamon to the sugar as you like. You can also buy premixed cinnamon sugar in a shaker can at the grocery store in the baking aisle. I've also made this with brown sugar mixed in and it's good too. It gives it a more caramel-ly flavor. 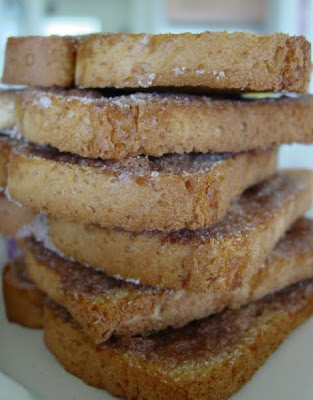 We had these this morning...I laughed out loud when I read the comment about your husband cooking everything on high. I think he is related to my husband - it makes me crazy!! ;)

I had this again for breakfast and it was so good!

What new to say about this except.....MMMMMMMMMmmmmm. Oh, and I should have promised the kids cinnamon toast instead of cinnamon rolls! It would have been A LOT easier! :)

What new to tell you Monica? You know I think you're the bomb and am so happy to have you as my friend! Thanks for lending me you ear yesterday. I REALLY appreciate!

Had to go back and comment on your original post. I grew up on my Mom's cinnamon toast that is very similar. Must use white bread, it isn't as good on wheat (and always prefer wheat). Must use lots of butter, more than usual. Must have the perfect balance of cinnamon and sugar--not too much cinnamon.

Thanks for taking me back and inspiring me to make it for my boys--I'd NEVER made cinnamon toast for them! It's now in the rotation!

Ohmylanta..My mom used to do this...well she melted butter first, added cinnamon & sugar and then spooned it over the bread. I stopped making it because my hubby thinks it's too crispy..but your post made me long for some! So I'm declaring breakfast for dinner and the man will just have to suffer! It's a treat well worth it. Thanks for the trip down memory lane.